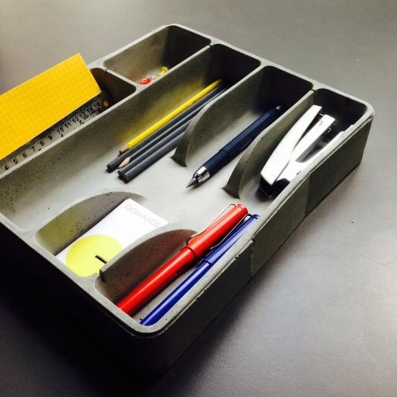 My infatuation for extreme designs understandably drew me towards GOMAADS at the Gurgaon Farmers’s Market early this year, and so I chose to write about it as oppose to the orgasmic food at the venue. Looking at their accessories and tableware I remembered a quote “The details are not just details.They make a design” by Charles Eames- a well known American architect of the 20th century, which beautifully describes the properties of cement, the material used by them.

This fun project derives its name by putting together the first few alphabets of the three designers Gopendra Pratap Singh, Malvika Singh and Aditi Sharma. Aditi a young and restless interior designer became skilled at Interior and living design from Domus Academy, Milan. While Malvika being a mother of two daughters re-established her creativity in interior design even after motherhood set in, since she had studied it at NIFD. And Gopendra Pratap Singh the third partner also from similar backgrounds of architecture from NIT Raipur, Chattisgarh, and product design from SPA, New Delhi is a maverick who won accolades with an EDIDA award.

These concrete decorative and utility products started forming shape after a lot of R&D, which the trio indulged in on an everyday basis after work, at Archohm (a design studio offering innovative design consultancy for architecture, urban design, interiors, landscape and product design). GOMAADS started in January 2013 while experimenting on concrete, cement an usual yet unusual material for decorative items in India; though I cannot forget the colourful cement flooring in my ancestral house, which one doesn’t find anymore as tiles have replaced this art in our country.

The trio is working hard to change people’s perception regarding cement. It’s the light weight of the concrete products which is their USP right now, as it’s not about reinventing the wheel but the usage of a new material for the same. Cement is chemically treated while its usability and properties are highlighted. Each product is soaked for 20-25 days in water for more durability at the end of the production cycle pushing the genX designers to create something with a difference.

Web browsing, world cinema and travels are the only other activities which keep these edgy souls alive and kicking, other than work. Also Archtours, organized by the firm for its architects and designers are their real inspirations and highlights of the year. All teams excitedly sketch out their itineraries on a shoe string budget to visit few countries and learn more about the region’s contemporary art and craft. Aditi’s favourite tours have been the Scandinavian and the Spain and Portugal camping, while Gopi loved the U.S of A. trip, as he related well to Frank Llyod Wright’s Falling Water house (designed for his client the Kauffman family). Malivika’s only Archtour yet, is what she reminisces of Germany, France and Netherlands.

So GOMAADS is an attitude which one needs to adopt with everyday products that impress a space and express a personality.