At the Victoria and Albert Museum in London, an exhibition of Indian history is being shown through its textiles – The Fabric of India. In India too, at the Amazon Fashion Week, being held in New Delhi, Sanjay Garg and Anavila (both featured by Marigold Diary) were chosen to open it as they are seen as influential designers who have doggedly steered the attention of Indian fashion industry towards handloom and traditional textiles, in recent times.

With all this undercurrent I thought it’s time to feature Mallika Mathur, a must-go-to designer for any festive occasion.

Nearly a decade ago, after a successful stint as a ramp model, she began researching about the different styles of saris found in Eastern U.P. for a coffee table book – Saris of India: Tradition and Beyond. It was authored by R̥ta Kapur Chishti and edited by Martand Singh who has been her mentor, since.

The same book at her Soami Bagh studio, lent an air of authenticity, lying on an ornate wooden legged table, strategically placed under a vintage indigo blue chandelier. The walls spoke of her excellence in Tatami silk and handwoven Banarsi fabrics being recognised by UNESCO and World Craft Council in South Asia, respectively.

Climbing upto her studio, one can admire the richly coloured Gyasser – Tibetan brocade wall art, which infact are being sold on Jaypore along with silk curtains, cushion covers and tablecloths, under her home furnishings label – Silk Route Tales. She mentioned them being sold at the Santa Fe International Folk Art Market – a hub for artists from several countries, who come together with their handmade masterworks to propagate slow movement. 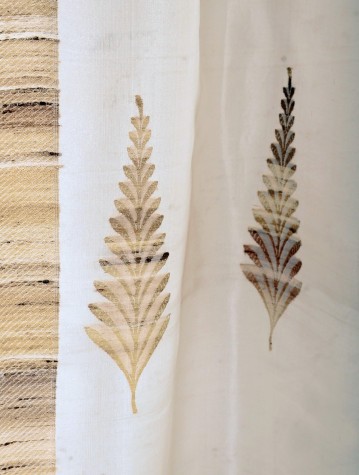 My, adventure began when I started browsing through her old wooden cupboards filled with a variety of cotton Jamdanis, tissue, Katan silk, Tanchoi, Paithani (Benaras incorporated temple borders & Paithanis) and Pattli Pallu sarees. In a pickled state till then, the spirits dampened when I heard her talk about the downward trend for sarees, even during trousseau shopping.

But being a die-hard saree fan, she’d still recommend a tissue saree – as a must-have for every damsel. It can be teamed with an exciting contrast coloured petticoat, a beautifully tailored brocade blouse and styled with a brooch on the seedha pallu for a vintage European look.

She later got me engrossed in the evolutionary part of Benarasi weaves and the European influence on their motifs, like bouquets of flowers, musical instruments, kettles and butterflies. And how the Benarasi silk came to be known as ‘Kinkhwab’, which in Persian language means a fabric of your dreams, as it was commissioned only by the royals for special events. Also, why real zari sarees are called Ganga Jamuna – because the sliver wire dipped in gold used in their weaving lends it a distinct sheen.

Further, while reminiscing of her research days she talked about her liking for Baccha bootis and her desire to revive the Bachkani sarees for kids – 4 metres long, worn by girls as young as 4 yrs. of age up until the British Raj.

More on her bucket list could be Awadh Jamdani and many other forgotten textiles, but only when commissioned!!!