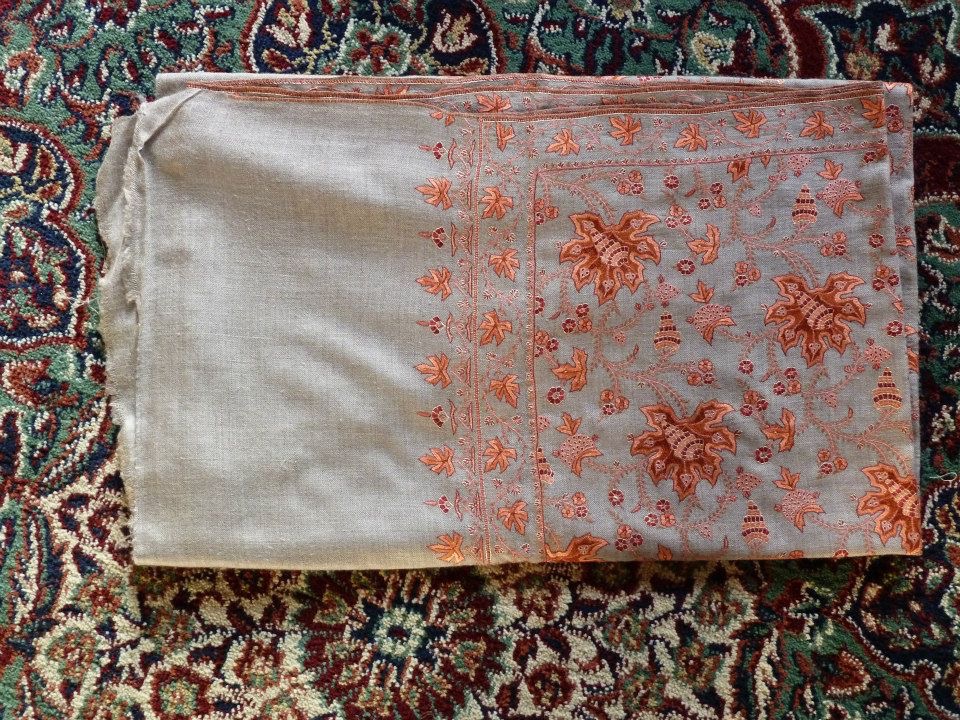 Preferring hot beverages like coffee, Hot Toddy and kehwa, curled up in bed throughout my new year break I was engrossed reading a coffee table book The Romance of the Cashmere Shawl by Monique Levi-Strauss lent by Shameem Abdulla (a dealer of beautiful and authentic shawls, upholstery, carpets, walnut wood furniture and papier-mâché from Kashmir in Delhi).

In it, the author – a textile researcher, discussed Kashmiri shawls and their history extensively; romanticizing its journey from India to Europe.  She began with patronization of shawls during the reign of Ghiyas-ud-Din Zain-ul-Abidin – the eighth sultan of Kashmir, nicknamed Bud Shah (the Great King). He had summoned a highly skilled weaver named Naghz Beg from Turkestan to build a loom for weaving shawls.

Then in 1664 Francois Bernier, the first European visited Kashmir, too mentioned the delicate softness of the local textiles in his journal Voyage dans les Etats du Grand Mogol. The French physician and a traveller of the seventeenth century, also noted that the shawls would not have been enviable without Kashmir’s pure air and incomparable water. Apparently, their properties have a certain effect on the dyes which softens the coarse fleece, when the shawls are washed in the local canals.

So while admiring Ms. Abdulla’s shawls, I learnt to distinguish between the Kashmir Pashmina and their cheap Nepal or Punjab imitations. All along, keeping the lady’s cognizance regarding Kashmir in mind, I could relate to her pleasure in selling to textile connoisseurs of Japan, Switzerland, U.S.A. and London.

Infact, the western travellers and French royalty have been known to gush, since late eighteenth century, over Cashmere shawls woven by master weavers of this state. Produced in upper Kashmir and Ladakh region, the wool came to be known as “cashmere” ever since the English began calling the province so, during their rule. (cited from Wikipedia) 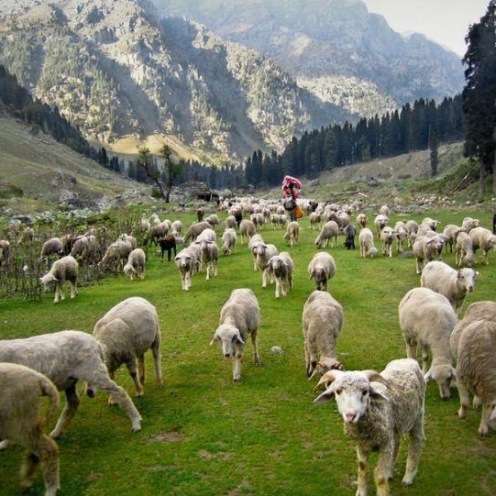 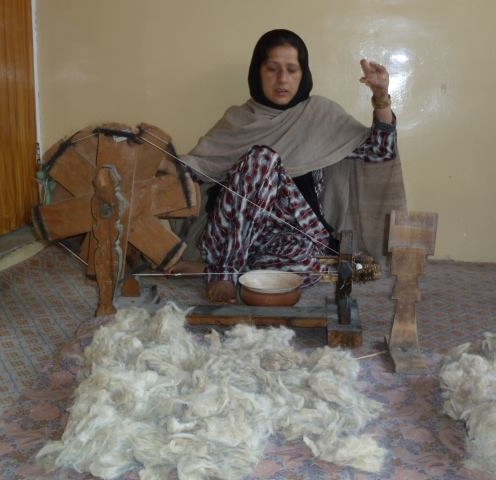 Britishers were the first Europeans to develop an interest in this region’s woven goods. Later, when Napoleon’s officers returned from the Egyptian campaign bearing gifts of such exotic weaves, their recipients were spellbound. Fashionable ladies realized that nothing could be better suited to the new, classically inspired fashions than the softly draped folds of these shawls. Their discreet floral motif ornamentation added detail and interest to the sobriety of their plain textiles. (cited from The Romance of Cashmere Shawl)

Shahtoosh is made of outstandingly fine and light down hair of the Tibetan antelope (chiru) while Kani is a fine twill tapestry weave deftly woven with bobbins using pure pashmina yarn, to create intricate patterns. It could take two weavers an year on the same loom to complete it, despite of putting atleast ten hours each day. While Kashmir’s most exquisite embroidery covering the entire pashmina shawl is called ‘Jamawar’. By virtue of the embroidery, the value of a shawl increases; making all these the most sought after luxurious shawls.

Ms. Abdulla also informed about the best embroiderers based out of Zadibal in Srinagar – primarily a Shia muslims area; giving huge credit of this popular cottage industry to our Oriental and French influences.

Now since temperatures are predicted to dip further, I thought it best to quickly recommend my latest find, yet another basement store in Nizamuddin East, New Delhi, which without any frills showcases a covetable collection.