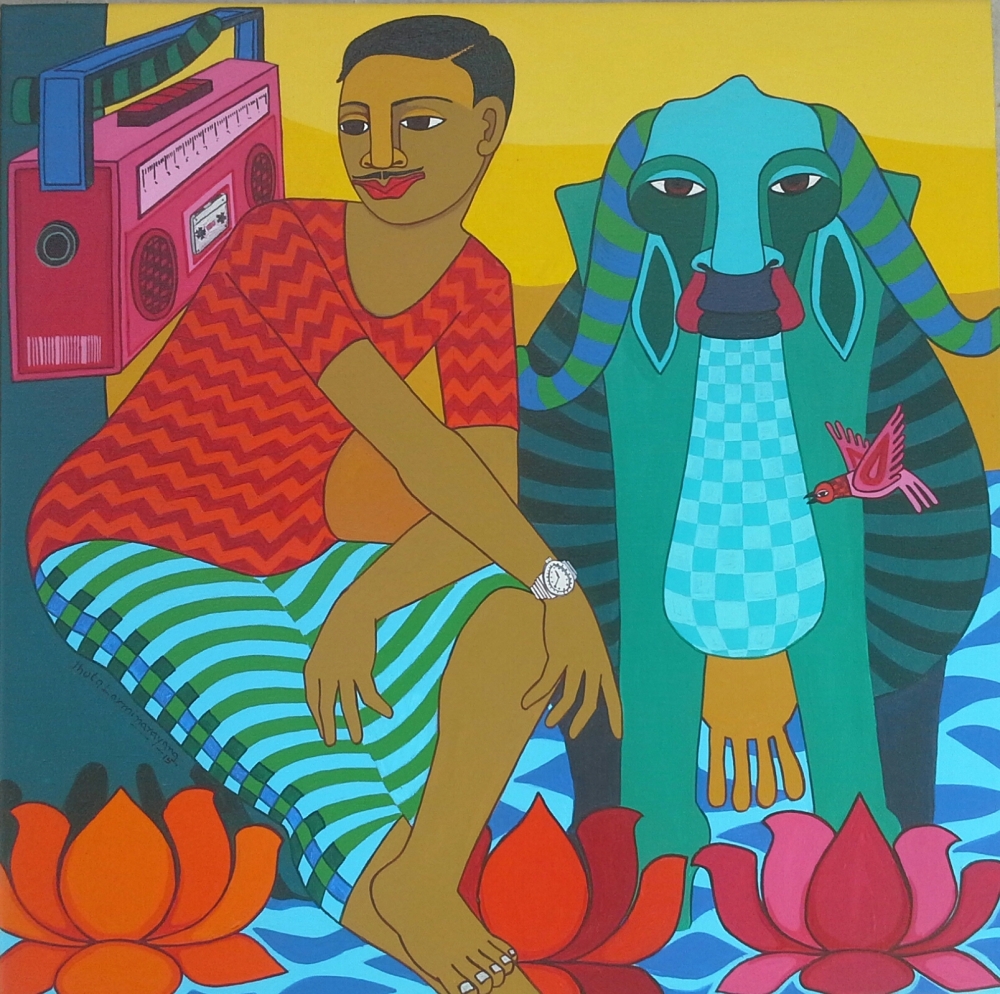 A young man striking a pose while enjoying music on the transistor by his buffalo, another one running after the birds in the fields, three young damsels making mayhem while sitting on a buffalo, buffaloes gloriously resting under a canopy glued to some blaring noise and many more colourful paintings recreate his rural imagery that gave me goosebumps; increasing my yearning to go back and relive a small town life.

Just few days ago, 43 yr. old freelance artist – Thota Laxminarayana contacted me through social media. As an art enthusiast the vibrant colours, stylized figures and simplicity of the theme struck a cord with my  Marwari aesthetics.

Thota’s vocabulary rooted in Indian folk art, is a contemporized rural idiom. There is never a dull moment on any canvas, as the social documentary enfolds his country life, where humans are happily coexisting with the flora and fauna, like in utopia. It’s akin to the propagators of new age design who encourage reverse migration from the cities back to the villages, in the hope of increasing our happiness index. 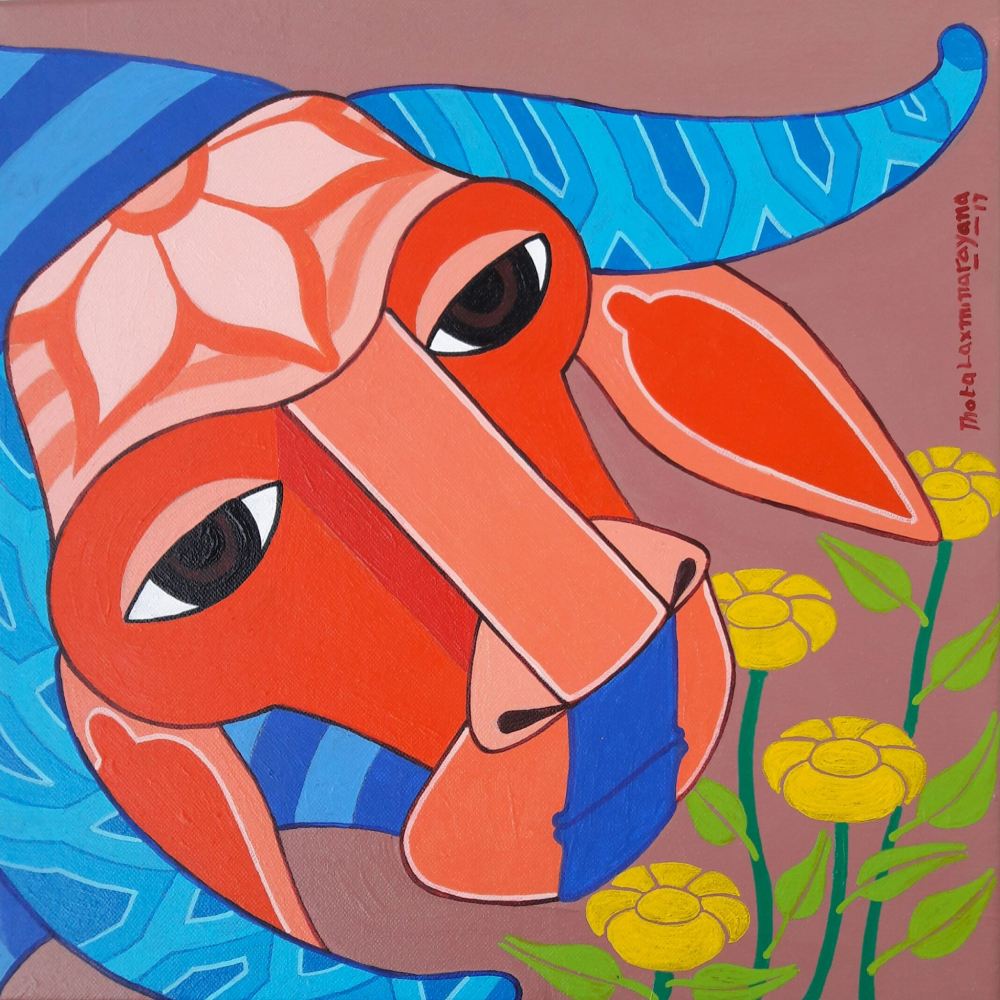 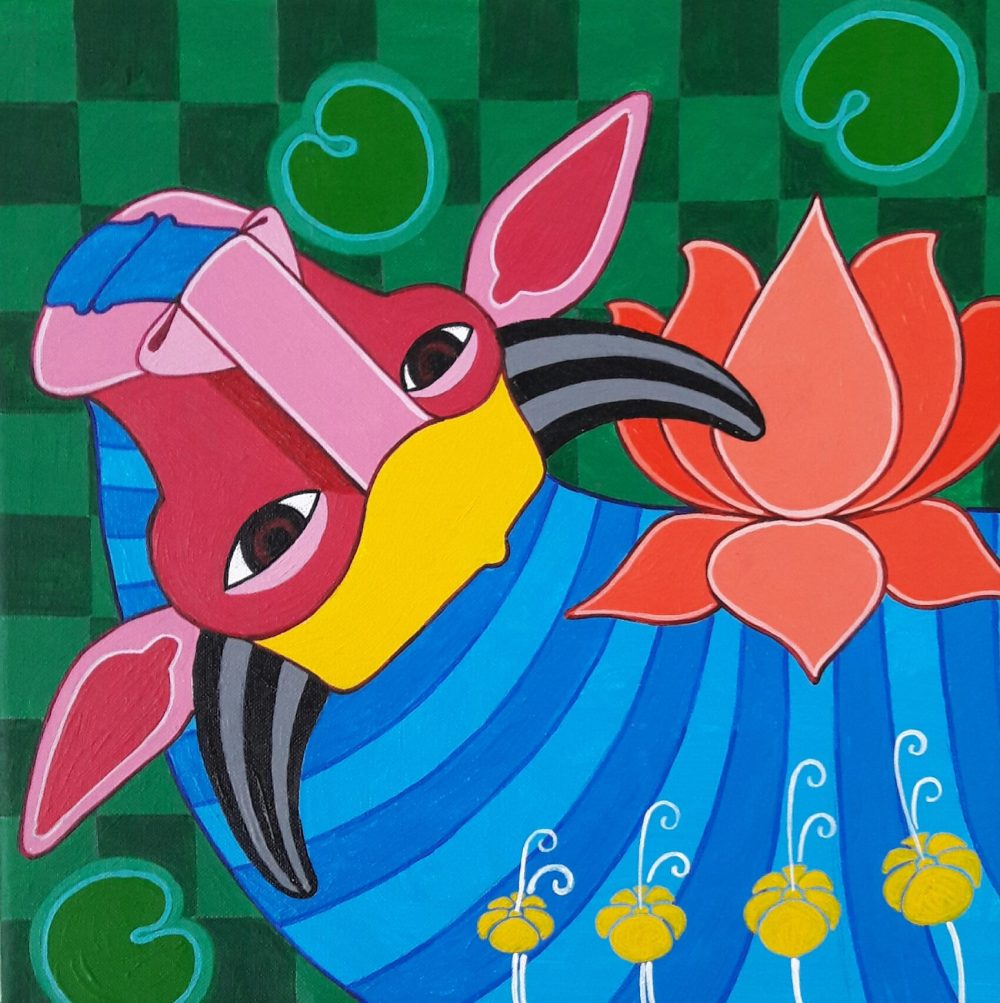 Born in Nirmal, the artist also learnt its regional art, which is a small-scale industry of the tribals in Adilabad district, Telangana, India. And under the tutelage of Shri Ravinder Sharmaji, the founder of Kala Ashram, he further sharpened his skills.

Actually, Nirmal Art dates back to Nimma Naidu, a 17th century ruler who was a great patron of arts. He got naqashi artists from Rajasthan to settle down here and make traditional toys out of poniki, a unique tender wood, bringing significance to the town. Later in the 1950s Lady Amina Hydari – wife of Sir Akbar Hydari, President of the Nizam’s Executive Council from 1938-42, brought those artisans to the princely state of Hyderabad to promote their craft. Since sometime spray paints used on vehicles, add lustre and durability with ease on hundreds of Indian mythological gods for the plethora of religious Indians; have replaced the natural colours derived from the minerals and plants of  the jungles which were supplied by the tribals.

Inspired by the modernism of M.F. Husain, surrealism of Picasso in the mid 1920’s and Mexican art he began painting the picturesque surroundings of his hometown. This brought to life the mundane in a village with trendily accessorized and clothed tribal young, who’ve slowly adopted the ways of the big city; evolving with their traditional linear drawings.

For 7 yrs. he had been a Resident Artist of Daira Centre for Arts and Culture, Hyderabad, holding art camps there. As a freelancer in the future, he would like to collaborate with the Telengana tribes to elevate the status of their age-old crafts like Metal-Casting, Terracotta and Bamboo, by retracing their ancient techniques. And just like his sur-namesake Thota Vaikuntam  – a well known Indian painter of Modern Art, he too promises to breathe freshness into ‘plein air’ with ‘conceptual style art’…..which leaves me craving for more!