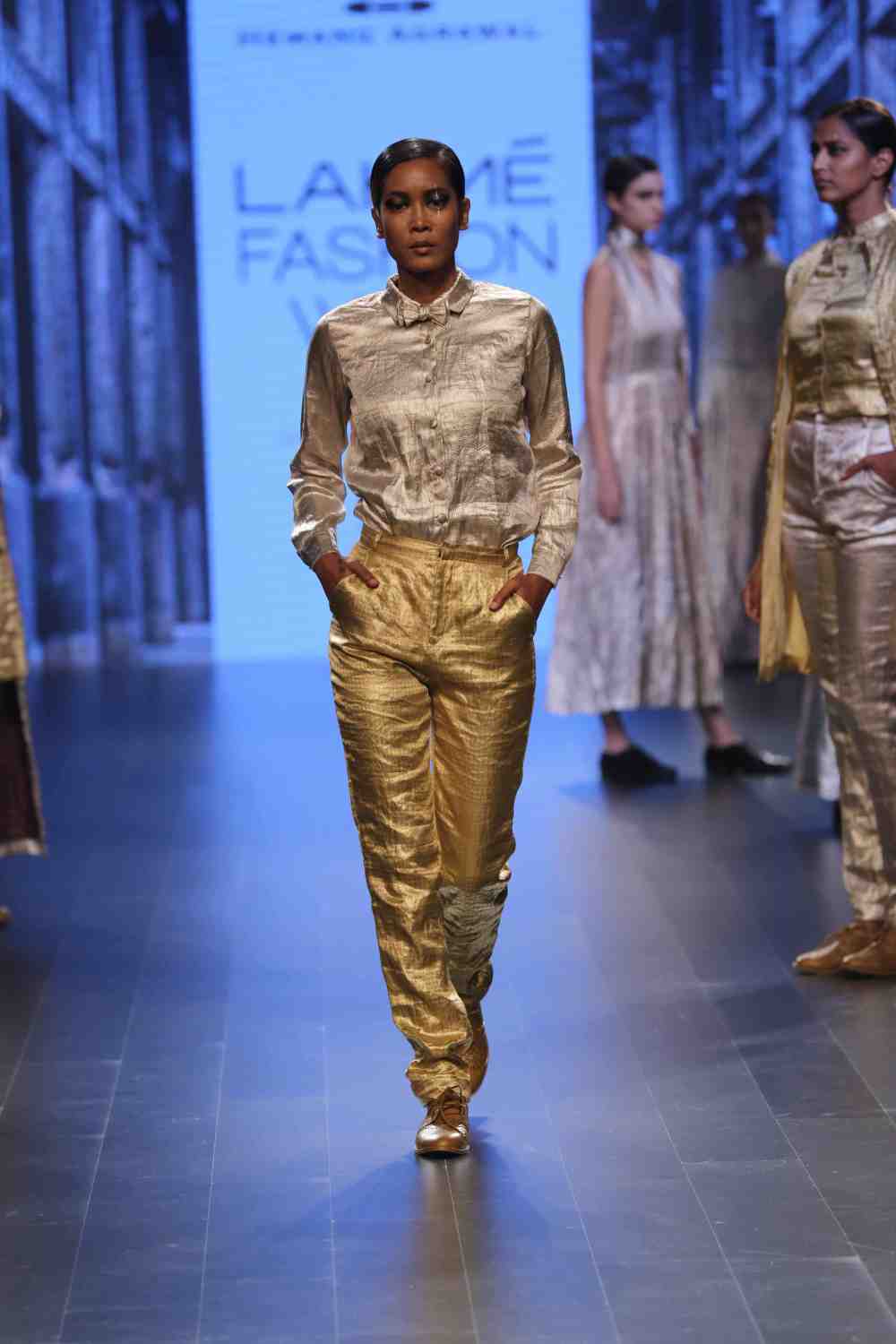 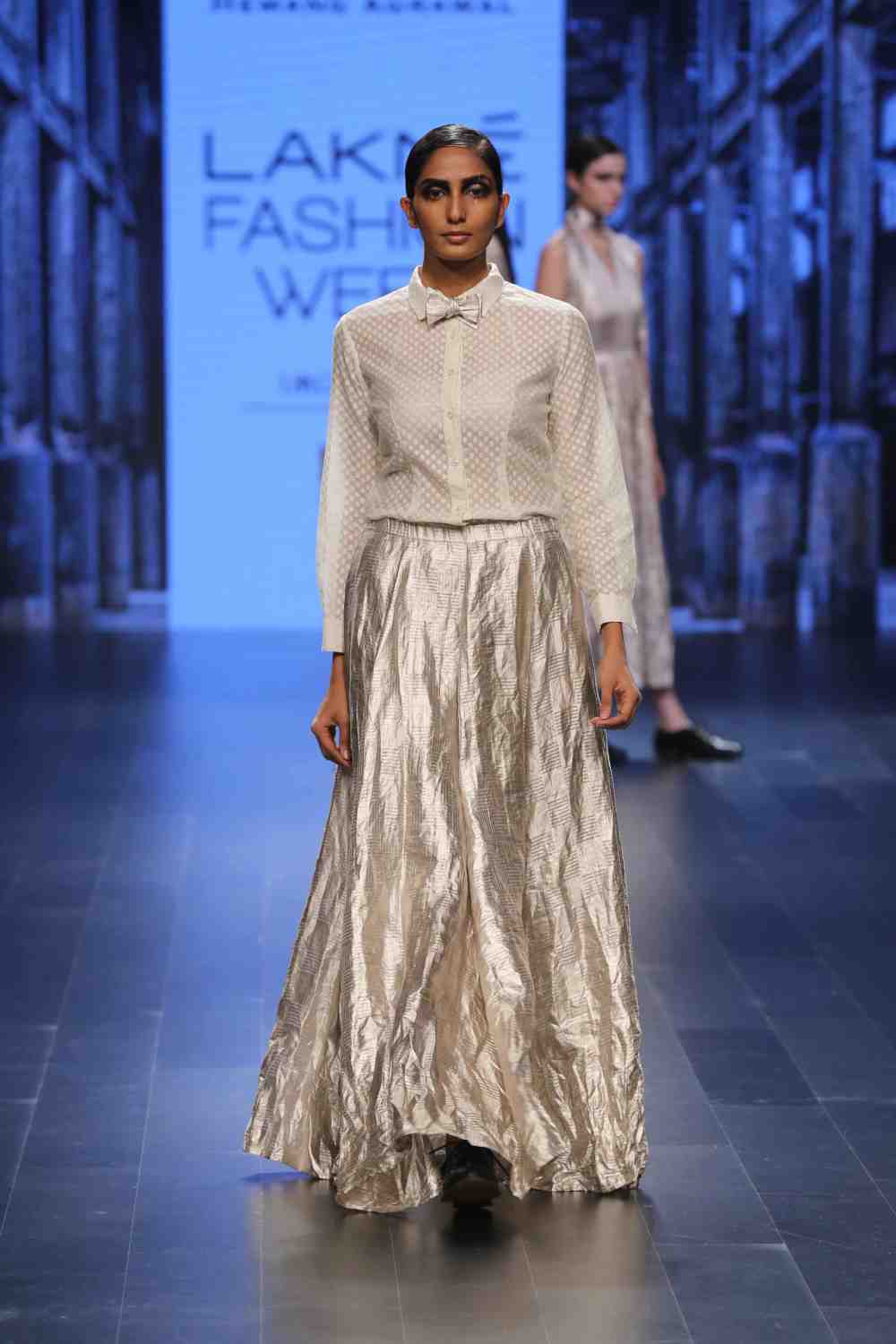 My fascination grew when I read online about Hemang Agrawal’s textile journey after seeing his dazzling collection at Vayu, an upmarket concept store. Particularly how as a young lad from Baneras after studying at NIFT, Mumbai, thought it best to give up his scholarship for Masters in Fashion at Nottingham Trent University to go back home and make something of his textile roots(father had a saree business). Apparently this life altering decision was taken after listening to Padma Shri Rahul Jain‘s talk on Safavid, Persian and Mughal drawloom patterned textiles; wherein he explained in depth the sophistication and innovation of Benarasi textiles of the past several centuries. Later this foremost textile historian and revivalist of India became Hemang‘s guide and guru.

As an upcoming textile developer the 36 yr. old learnt from his guru three main virtues of this trade, building the ethos of his company – value the perfection in the process, support the dignity of the weaver and be responsible towards the community. Engraving these in his heart, he set off breaking patterns with metallic fabrics on throw and fly shuttle handlooms for simple functional silhouettes with contemporary motifs for his eponymous label. But for me the icing on the cake has been his nomination for the womenswear category in IWP 2017/18; enough to ask him few questions:-

MD: What have been your design influences while growing up?

HA: Visual art was a big influence since both parents studied fine arts at Benaras Hindu University. Indian masters were a part of our everyday conversations at home(Benaras). Later, during my design school(National Institute of Fashion Technology, Mumbai) days, I was enamored by the Japanese design philosophy, not limited to fashion.

MD: Tell us, what in the Benarasi weave would the luxury world associate with, since you also manufacture  for the Japanese and continental European fashion brands?

HA: Benares is the last remaining bastion where the handloom patterned weaving is still practised at an industrial scale. However one tends to look at Benaresi, as an ornate textile-design form rather than a technique, which is a pity… because there can be so much more to it than just brocades and mughal patterns. I maintain that while we may have achieved great depth in its design vocabulary, the surface has barely been scratched to explore the technical versatility of its handlooms. (This statement comes from a student who was one of the toppers of his class and had won an award for Textile and Surface Development while studying at NIFT.)

MD: How did you make zari (metallic yarn) yours, from the Benarasi textiles?

HA: Zari, has always been a part of the Benares brocading. However, to my knowledge 100% metallic textiles have not previously been explored here. Having said that, no one can claim ownership of an art-form as there are other exponents who’ve worked with these fabrics and used the metal yarn. But we (HEMANG AGARWAL label) do believe that our treatment and experiments have touched upon a previously uncharted territory. Our textiles are quite unique in composition, technique and process which results in a new drape with a distinct feel and fall.

MD: Tell us a bit about your latest collections?

HA: We are currently working on two collections- one for the International Woolmark Prize  – ‘221A’ which is an attempt to explore synergies between the western fashion sensibilities and the skill of a Benarasi weaver through an entirely novel use of woolen yarn. The other which we provisionally call “The UnBenares” is for the Indian market – a quirky take on the traditional textiles for Autumn/Winter 2017. It will be in the stores in September. And currently our range of garments and sarees in pastel and candy summer metallics are already at Ensemble, Ogaan, Vayu and Amethyst stores.

His apparels are made of natural fibres and precious metal yarns, employing age-old techniques which are fast disappearing in the foremost Indian centre of patterned hand-weaving……so you musn’t be afraid to sparkle a little brighter darling!!!