As a child with a quirky sense of humour his style heroes were Tony Duquette, Cecil Beaton, Oliver Messel, The Baron de Rede, Arturo Lopez Wilshaw, Emelio Terry and Carlos de Beistegui . In 1995, when Wilkinson and his compatriot, Tony Duqutte came up with their first jewelry line for Bergdorf Goodman, Vogue wrote – “After a maximum of minimalism, all of fashion is turning towards Tony Duquette for inspiration,” (cited in Vogue Arabia)

On reading several interviews given by Wilkinson the design enthusiast in me excitedly connected through email with the owner and creative director of Tony Duquette only to discover his “love for maximalism in Indian design”.

MD: Tell me about your life’s journey with Tony Duquette.

HW: I wanted to work with Tony Duquette since the 7th grade. And got a chance when I was 17.  Initially for two years I worked under him as an intern for free. Then for the next three years as an assistant designer on a stipend of $50 every two weeks. Thereafter, I started my own business which made me successful interior designer. That’s the time Tony and I became partners in a series of apartment houses, office buildings and spec homes. Despite him getting older, people continued offering interesting projects which he began turning down.  I told him to take those on for me to do, and later I’d split its profits with him. It was the first time we became business partners.  When Bergdorf Goodman, New York, invited us to create one of a kind jewelry collection set in 18k gold with precious and semi precious stones I purchased half of Tony Duquette Inc. (been in business since 1941) and have been the designer of Tony Duquette’s  jewelry since thentill date.

But it was before Tony’s death in 1999, when he was 85, that I purchased the other half of the company and the trademarks to his name.

MD: During our initial online interaction you mentioned your fondness for Udaipur. When and how did you fall in love with the Venice of East?

HW: I have visited India 9 times and have made sure to go to Udaipur and stay at the Lake Palace each time. I think it impossible for anyone with a soul not to fall in love with Udaipur, especially when you’re staying at the magical Lake Palace!!! 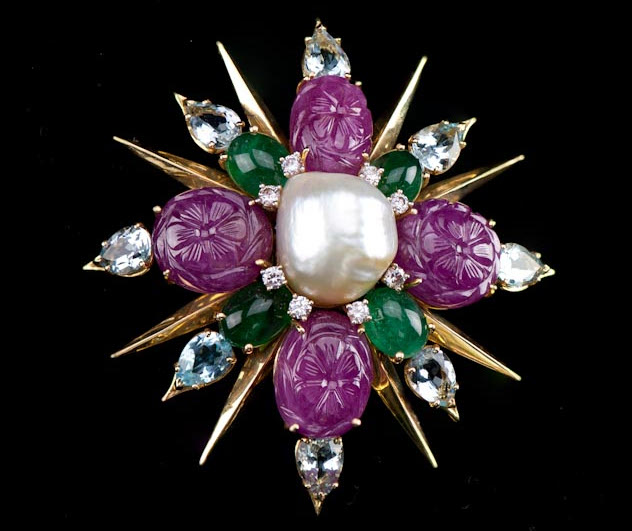 MD: What do you think of ‘maximalism’ in Indian design?

HW: India since the beginning of time has been a bastion of maximalist design. The Moghuls took extreme decoration and architecture to the heights of magnificence and complexity.

Since the 14th century,  the world has been inspired by Indian maximalist aesthetics.  Europe and the west have borrowed (or stolen) heavily in the areas of textiles (all english chintze has a foundation in traditional indian textile design) furniture, finials on drapery rods or lamps. Brass hardware, and architectural dreams come true like at the Brighton pavilion. Anglo Indian furniture carved in ebony and inlaid with ivory has sat side by side with the best examples of Louis XIV, XV, and XVI; and then Chippendale, Adam and even more modern 20th century designs coming out of Italy, America and France.

The maximalist nature of traditional indian architectural and decorative themes is one of the many foundations of the new maximalist movement along with Chinese Imperial, French Court ans Italian Renaissance styles. Not one of which is more important than the other. But it is the mixture of all of these that are contributing to our new 21st century maximalist epoch in design.

MD: Have you been able to translate Indian maximalism into your work?

HW: I love India… I love the history, its architecture, their traditional costumes, fabrics, moghul gardens and jewelry. Maximalism, is pretty apparent in my interior design projects, jewelry, textiles and wallpaper designs and home furnishings.

MD: Am curious to know where you source your stones from and where is the jewellery made?

HW: Believe it or not… I am still working from 4 vaults full of stones purchased by Tony Duquette since 1941 and over the years.  We did purchase an enormous cache of stones from Gem Palace (Jaipur) way back in the early 1990’s before that establishment became an international retail operation. Now we augment our collection of stones by making  occasional trips to the Tucson Gem and Mineral Show where many Indian dealers congregate.

But our jewellery is made in New York. Each piece is one-of-a-kind. We never make two of anything unless it is a bracelet or a pair of clips.

MD: Who are your clients?

HW: Well-known millionaires and billionaires….. Have done a necklace for the Duchess of Windsor, a brooch for Mrs. Richard Nixon, lots of pieces for Mrs. John N. Rosecrans Junior (known as Dodie Rosecrans). We’ve also decorated her Palazzo in Venice and house in Paris, when she was the backer of John Galliano !!!

Hollywood actresses too have adorned our pieces.

MD: Have you dedicated a jewellery line to India, considering your love for it?

Tony Duquette, the house makes on an average 60 pieces a year with precious and semiprecious stones set in 18k gold or other unconventional materials such as wood, resin, and seashells. Basking in the glory of maximilism far too long, the global  Indian criss-crossing the world is now looking to crystallize the minimalism movement, going back to our post-colonial Swadeshi roots. To quench that thirst Hutton, please allow us a deeper peek into your treasure trove!